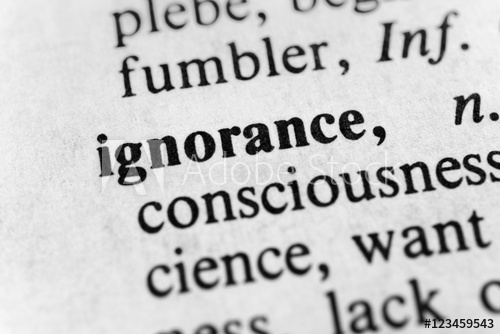 Ignorance! Ugh, that is so irking. Isn’t it!? I know many of us are being bothered by ignorance and we have absolutely no idea how to handle it. I know it’s not easy but it’s high time to be strong and face all that jazz. How do you confront such a situation? Do you know how I handle ignorance? When someone ignores you repeatedly as if you don’t exist and you just go blank. Does that happen with you too? It happened to me lots of times then finally, I managed to figure out the way to deal with that. Ignorance gives you a lot of pain but why should you suffer for somebody else’s mistake or rudeness.

Read on to learn how to handle ignorance…
Basically:
Ignorance is TWO types.
Honestly, we don’t care about the first kind because it’s something that they’re not comfortable with, so they avoided it. Actually, they don’t know what to talk, so simply they avoid it. So, it should not hurt you. The second one is an intentional doing. But I feel that shouldn’t bother you either. Because they’re the people who don’t have confidence and feel you’re superior to them. In one way they admire you beyond the limits, they want to be like you. So they resort to the painful path. It’s painful for them more than you, trust me. They’re the ones who can’t live peacefully even a second hating you. Pity them.
Why people ignore?
If we wanna sum up the reasons for ignorance, they are like this…

Actually, I don’t see why people do that. I mean, see, everyone wants to be happy ultimately, yes or no. And what gives you happiness? PEACE OF MIND. Jealousy and hatred are the negative feelings which ruin our peace of mind. When that happens, you’re not happy anymore. Then why would you want to ignore somebody and spoil your happiness? You’re doing that which gives you nothing in return. Moreover, it spoils something you already have, PEACE.

How to handle ignorance?

First and foremost, understand this well. If a person ignores you, it’s their life and they have every right to decide what to do. So, never feel bad for something that’s not in your hands. I know, when that happens several questions pop up instantly like “what have I done?”, “After all, I did so much good to them”, “I don’t even know them much, why are they ignoring me?” Yadda Yadda Yadda…… Leave all that. Don’t question somebody’s doing. It’s their choice. I know, it’s better said than done. All you can do is to learn to live with that. Believe me, I said after I did and I felt so much better. If something bothers you, simply avoid it.
Second:
what should you do now?
Here you have three choices to handle ignorance.

Of all the three choices there’s one thing you should not do. ANALYZING. I know many of us analyze things when something we don’t like happens. Even I did (once). But what’s the point of analyzing when it’s done by others and you can’t change it? You’ll never find an answer. So, Don’t over think and feel blue for being ignored. You can’t feel bad for something that’s not in your hands, right! Instead, I feel you should feel like a star because people ignore you only when they admire you beyond the limits. The number of people that ignore you is directly proportional to how better you are as a person.

How I handle ignorance?

I’ve lots of stories filled with ignorance but the top of the list happened when I started this blog. This blog is just 2 months old. In these 2 months, I’ve learned not just about blogging but also about people and their mentality. When I started this, I was so desperate for some feedback from the people I know but very few of them responded. Literally, I can count them on my fingers (Actually, I hardly have to use all my fingers, LOL!) But I didn’t feel bad instead I thought “people ignored, maybe I did something worthy”. And that moment I felt myself stronger than I ever was. That moment I realized who truly cares for me. That moment I realized even those which we consider as bad things (like hatred, ignorance, sadness etc…) are also necessary for life. Those things help us to know what is what and who is our real well-wisher. There’s an adage that if there’s no darkness you wouldn’t be able to appreciate the light. That’s how I handle ignorance.

Hope you know now how to tackle ignorance. Don’t forget to like, share and comment.
If you have any such bitter experiences, feel free to share them with us in the comments section below. Who knows, you might inspire someone!
Love,
Nikki.

If that ignorance led to bullying, learn how to deal with it in one of our posts about bullying. One way to stop bullying.

Also, I have been recently interviewed. Yay!! Find some time to give it a read and let me know how it is. Interview

3 thoughts on “How to handle Ignorance (3 practical ways)”