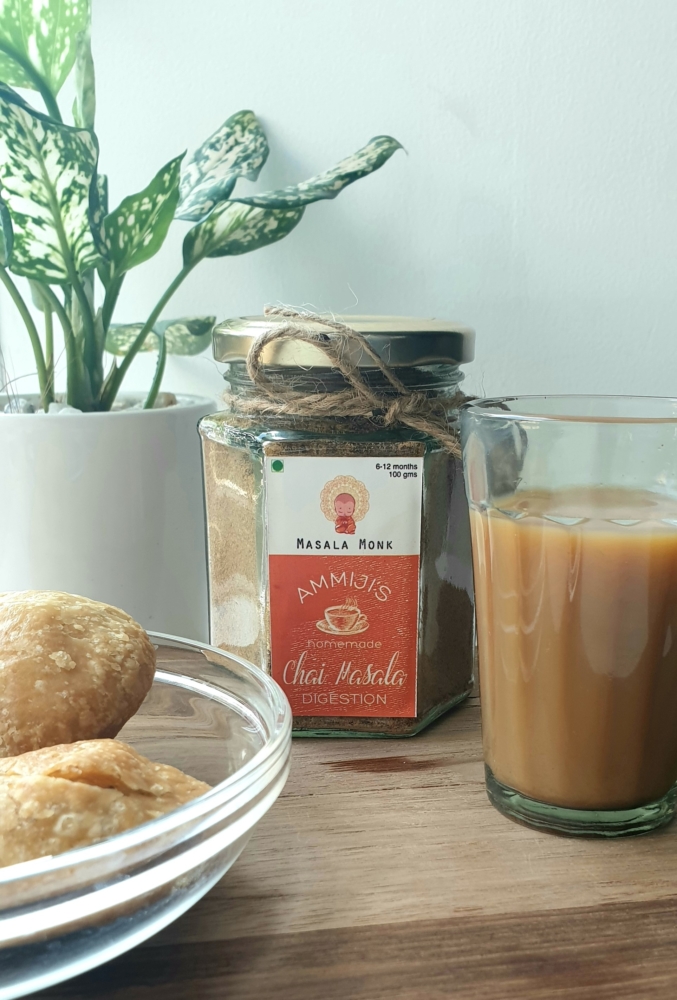 A cup of Chai or tea marks the beginning of the day for many of us, at the very least for me it does. And not just the bed tea but every sip from a cup of chai that I take is refreshing for me and maybe for you too. But have you tasted a cup of chai blended with chai masala and that too the one which has been crafted from the hands of a mother? If you haven’t, then it’s time you try the perfect taste added to your next cup of chai with Ammiji’s chai masala.

Though I am a fan of the fragrance and the delicacy of a cup of tea, you might also love chai just like I do and therefore you need to read this review of Ammiji’s Chai Masala. Know everything about this product and why this is worth a try.

Truth be told, I have tried several experiments with my cup of chai but adding a pinch of this Ammiji’s Chai Masala has been the best. However, if you are not the one who likes tea the aroma of the cup prepared using this chai masala is going to test you too. So apart from the amazing taste, find out the health benefits coming with this mix of spices for your cup of tea in less than 2 minutes.

When The Package Arrives

Yes, I am going to start my review from the very moment I placed an order for it on the website of Masala Monk. And yes I was curious to receive the packet to try my recent purchase and I was delighted to receive within the delivery window proposed in the website at the time of placing the order.

So, the package has arrived and the chai masala was packed in a cute small glass jar. The packaging was safe enough to make sure that the product could be delivered without any harm to the product. In the next move, I opened the lid of the jar and my place was filled with the tempting aroma of the Ammiji’s chai masala. Without any delay, I was enjoying a cup of tea with this Chai masala in it and here’s what I found.

I was surprised after I have my cup of tea with Ammiji’s chai masala. The taste was no less than perfect and in fact, it was soothing and satisfying. Assuring that my patience and experiment with this product was successful. However, I was also pleased to realize that the product didn’t dilute any other flavour of the cup of chai. Neither were there any special instructions to prepare the perfect cup of tea. Just add half a tablespoon (more or less as per your own choice) while normally adding the ingredients in proportions as you and I like and it’s done.

The Ingredients Of Ammiji’s Chai Masala

The main components of this chai masala are cardamom and cinnamon. Though, these two are available in any kitchen but the proportions of these mixed well with other spices are the key to its inviting fragrance.

It’s been a few days that the Ammiji’s chai masala is a part of my cup of tea regularly and none of the flavors has faded away so far. And this aroma is fresh every time when I open that glass jar of chai masala.

Another important ingredient of the chai masala is Star Anise. The appropriate ratios of these components have made every sip of tea more welcoming.

The Preparation Of Authentic Chai Masala

There is no dispute on the importance of authentic taste of tea to people like me who love it. And therefore, it is important the taste and the quality, none of them are compromised when preparing the tea. Adding to the features of Ammiji’s chai masala, these two have been taken care of while preparing the years old recipe.

Every time when orders are received, this chai masala is prepared in small batches from scratch using the best of fresh ingredients with minimal usage of machinery. This implies that this chai masala is hand made. From sorting the spices, then grinding and packing it in the small glass jars, everything is done with precision.

Moreover, this process of preparation is chosen for Ammiji’s chai masala because of a sweet and specific reason. It was prepared back in the 1940s by a woman who experimented on a long list of ingredients and narrowed the suitable ones to three.

She was called Ammiji by her grandchildren who have today shared this recipe of hers and added the soothing and comforting taste of chai to many households of today.

The Healthy Variations Of Chai Masala

Apart from adding the supreme taste to my cup of tea, the Ammiji’s chai masala comes in three variants, each having a health benefit of its own.

They are said to be helpful in improving digestion, building a better immunity and keeping you active. Since the preparation team of this chai masala uses fresh and natural ingredients and the process is handmade, I believe the health benefits can be achieved.

And considering this, I tried the better digestion one. I can say that the hot cup of tea prepared with digestion improving chai masala has been doing fine so far for me.

The Jar Of Chai Masala

It has been established with the regular usage of the chai masala that the aroma is fresh and inviting and the taste of the cup of prepared is superb.

However, it may have been priced a bit high but seems to be well managed by the team, given the handmade preparation and quality of the components used for it.

The small glass jar also reads that apart from being used only in the preparation of chai, it can also be used while preparing kheer, puddings and some other desserts to add the great aroma of cardamom and cinnamon.

I recommend you to read: Apple Cider Vinegar? Is it worth the hype?