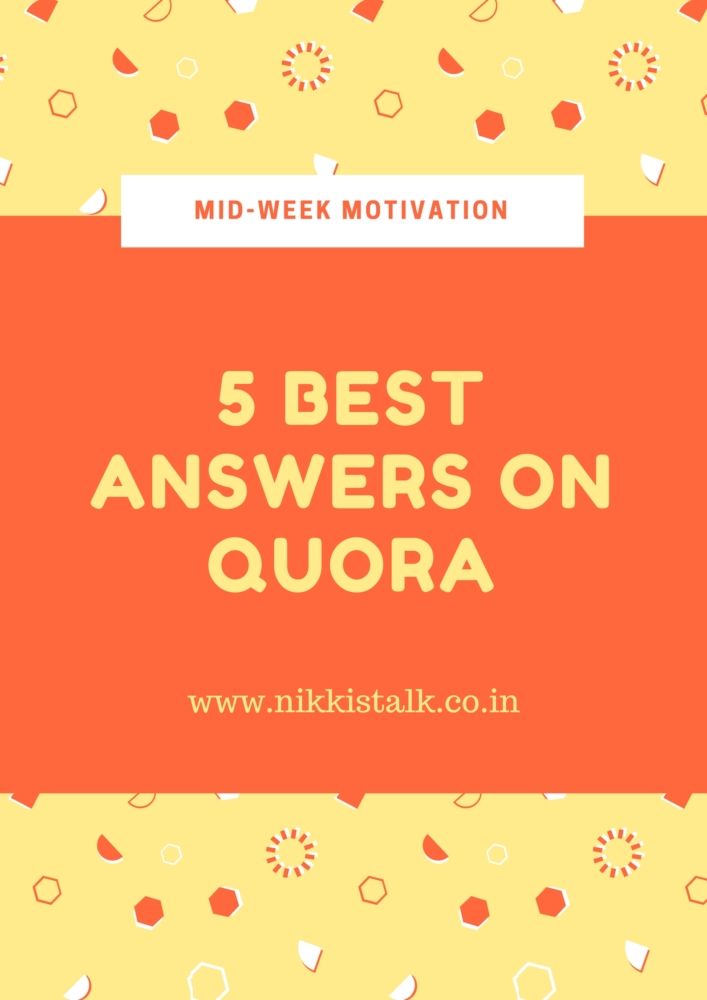 Quora. Well, all of you might have heard of it by now and many of you might have already been a part of it. I recently signed up for Quora. At first I’m not quite fascinated by it but eventually, when I started answering questions I loved it. It gave me a new perspective towards things, how people think. While interacting I’ve found some really great answers and I thought why not I sum up all best Quora answers I’ve found into an article. So, here comes the best Quora answers I’ve found about the life that you must read and if possible execute.

Let’s have a look at the most upvoted answers on Quora!

1. What are the signs that you are wasting your life?

Life is short, my friend. Make every second count.

You may also like 7 things we shouldn’t be doing

2. What are some of the greatest examples of the presence of mind?

Recently I was delivering a speech and I was using this Rubik’s Cube as my prop.

My plan was that I will take a solved Rubik’s cube along with me and will puzzle it up on stage and then solve it by relating it to the life. Like how life is just like a Rubik’s cube.

My main motive was to maintain an eye contact with the audience throughout my performance and this meant that I have to solve the cube without even looking at it.

I practiced a lot before delivering my speech and was all set to rock the stage. The speech started, I was on fire. Everything was going as planned and then suddenly I looked at my cube and found that I have messed it up. I was in serious problem.

I had two options left with me.

I chose the second option.

I changed everything that I had planned. And started speaking a completely new speech. I started telling them a story that how life is so unpredictable. You practice for something and are expecting great results, but life can surprise you anytime, just the way it has surprised me today. How I planned to solve the Rubik’s cube on stage and then messed it up.

While I was speaking to them, I kept on solving my Rubik’s cube. Although solving a Rubik’s cube is not difficult when you know how to solve it.. but the pressure situation I was in, made it difficult.

Everything then went my way and finally, I solved the Rubik’s cube and audience were hooting and clapping for me. I got the best speaker award in that competition just by using my presence of mind at the right time.

Also, check out social anxiety disorder and the ways to overcome it

The below one is a live example for the words life may take a turn at any moment!

3. What is the best motivational thing you have ever seen in your life?

Twenty years back, I had a poor and uneducated boy as a neighbor. We shall call him Ram. As his father departed very early in his life, Ram was left with a younger sister, mother and a grandmother to be supported by him. All the property Ram had, was a shanty house with no strength at all. The three-room house had a tin roof, and the economic condition forced the family to rent out one room for an inconsiderable rental. Ram used to do sundry, petty, insignificant jobs, including assistance to cooks, distribution of milk pouches, newspapers etc.

I often used to observe Ram being abused by his grandmother every day. On some occasions, I witnessed his leaving the food plate halfway unable to hear the abuses from his grandma. He dropped out of the eighth class from an obscure school and often used to run away from the home to try his luck in making meager money to feed his family. I used to feel awkward to observe Ram in such a deficient stage and occasionally helped him with a negligible contribution of money, used clothes.

Ram started his professional life as a cleaner cum assistant to the Sardarji. The Sardarji was an intense, enterprising individual always active on NH 16. The cash for transport fee used to get stored in the truck itself as banking facilities were poor that time. Ram served his master immensely well with no compromise in duties be it job or money. After three years, Sardarji decided to leave to Punjab after covering the cost of the truck. He assessed the cost of the vehicle, handed over the truck to our Ram taking a pledge that he shall operate the truck with the same energy and honesty. The only condition is that money can be paid only in case of Ram earning a decent profit.

Ram was very sincere and executed all the contracts he picked up exactly the way Sardarji discharged his responsibilities.

Exactly in five years, Ram owned five trucks with an office and a Villa at Kolkata. His company achieved a turnover of rupees 50 Crores last year. Ten percent of the stock is held by the Sardarji’s family in the privately held company. He takes care of forty people directly and about a hundred people indirectly.

I attribute the success to the timely help of Sardar Ji, Ram’s honesty, and sincerity, and to the market that accommodated Ram’s interest.

–Maheswara Sastry M
Also, check out 5 top motivational persons everyone should follow
A simple yet have the deepest meaning!

4. What are some small things that matter a lot?

Look at this picture.

What do you see? Some zigzag pattern?

You see minimum written there?

I just added two dots in the second picture. Something as small as a dot can give meaning to something senseless.

Some people cannot see minimum written there, they will find this answer illogical.

Interpretations are subject to viewer’s discretion. Before posting this answer, I knew not everyone will interpret it my way which I think is fine but I’m glad many of you are understanding and appreciating.

5. What are 5 ways to begin improving one’s self?

Friends, I am answering this question for benefit of all as I am just writing the sum of all my learnings of life:-

The one who believes you are not (great): you shall find this person challenging the crap out of you even when he is probably only smiling a “hi”! You will find yourself indulged in perpetual competition to prove yourself.

The person who believes you are: He shall motivate you even when you came last at the competition you had been preparing for thirteen years straight! You may want to make his belief come true at one point in your life!

The two persons are Criticism and Appreciation!! (critics appreciate, ya know??) They have been with you since Day1 and they know you the best.